Here is a simple recipe to make a smooth, creamy baba ghannouj, by adding some Mayonnaise to the classic dip. Some chopped cumin seed can also be added for a touch of spice and a bit of crunch with the smoky eggplant. The recipe will make three cups of dip and should take just over an hour to prepare. 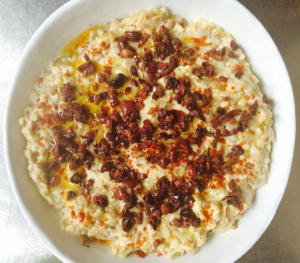 Heat the broiler on high and lay the eggplants out on a foil-lined baking sheet and broil, turning them as often as needed. Do this until they have browned nicely and are very soft. It should take about twenty minutes. Transfer the baking sheet to a rack where the eggplant can cool for 10 minutes. 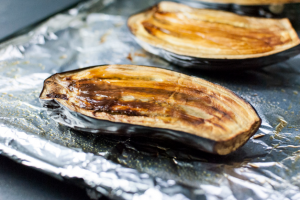 In the meantime, place the cumin seeds on a cutting board and drizzle with a few drops of olive oil. Chop the seeds until they are coarsely ground. Slice the radishes and kohlrabi and then place them in a large bowl of ice water. Let them sit until the slices begin to curl after 10 minutes or so. Drain the eggplant and put the slices out on a towel to dry.

Peel and discard any charred eggplant skin and place the rest on a cutting board. Chop the flesh and scrape it into a bowl. Stir in the chopped cumin along with the quarter cup of olive oil, the mayonnaise, lemon juice, salt, pepper, cayenne, cinnamon, and garlic.

Place the baba ghannouj in a serving bowl and drizzle with some more olive oil. Sprinkle with the olives and Aleppo pepper and serve with the radish and sliced kohlrabi.