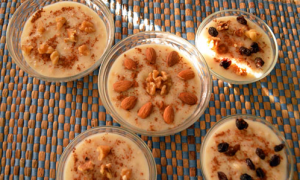 The month of Muharram is the first month of the Islamic lunar calendar and is one of four months of the year considered to be sacred. Fighting and war are forbidden during such times, and Sunni Muslims fast on the tenth day of Muharram, as well as one day before and one day after the tenth.

One of the dishes which are frequently made around this time is Ashura. Derived from the Arabic word ashara, translated into the English language, it means ten.  Ashura is a really basic recipe to follow and is simply delicious.

Here is a recipe for Egyptian Ashura which you can try out and then prepare some during Muharram. 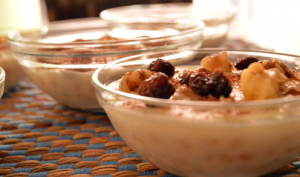 You will need the following quantities of these ingredients:

Depending on your taste preferences, you can garnish the Ashura with a choice of delicious toppings. Anything from dried cranberries to coconut flakes, raisins, ground cinnamon or an assortment of nuts can be used. It is entirely up to you. Don’t use too many extras as they may overpower the flavor of your Ashura. 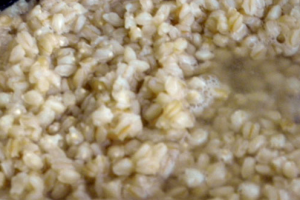 Follow these instructions carefully: Begin by rinsing the peeled wheat off well. Then place the wheat in a pot of water and make sure that you have covered it completely. Next, bring the water to the boil and then reduce the heat so that it can continue to cook slowly. Allow the pot of wheat to cook for at least a minimum of forty-five minutes until it has swelled nicely.

Now, you can add in both the milk and sugar, stirring until all the sugar has dissolved.

Take your corn starch which is now dissolved in the milk and mix it in with the other ingredients. You will need to stir this for ten minutes or so until it has finished cooking.

When it is done, remove from the heat and pour it into serving bowls to set. Let it stand for five minutes to get a good constituency.  Now you are ready to add your toppings, nuts or raisins, as you like. You can leave the Ashura on the counter as long as it is kept cool, but placing it in the refrigerator is always a better option.

So you should master this recipe in no time and the next time, Muharram comes around, you will have a new dish to serve!