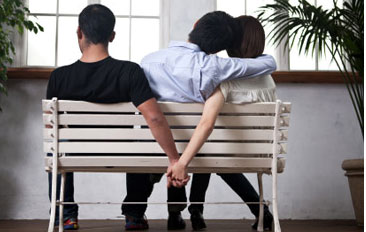 Falling in love is wonderful, isn’t it? There’s those meaningful glances, the shy remarks, the intense emotions that feel like they’re about to burst open.

But what if that someone isn’t your boyfriend or girlfriend?

Falling in love is wonderful, isn’t it? There’s those meaningful glances, the shy remarks, the intense emotions that feel like they’re about to burst open.

But what if that someone isn’t your boyfriend or girlfriend?

What do you do when you fall for someone else while you’re in a relationship?

There are so many landmines associated with falling in love with someone while you’re in a relationship with someone else, that it could probably fill a book– and then some.

It’s important to remember that no matter what you do in this situation, someone will inevitably end up hurt.  That’s why it’s so a tricky and unfortunate, but these things do happen.

Either you can repress the feelings and concentrate on getting back to your relationship and making that work, or you could throw caution to the wind and go after the person you’re falling for.

Either way, there are pitfalls along the way that will at least make you stumble, if not fall flat on your face.

The first thing to do if you realize you’re falling for someone else is take a look at your current relationship and see if you’re still in love with that person.

Lots of people can love more than one person at a time, but more often than not, the relationship will have been losing steam for some time before the new person even came along.

See if you still deeply care about the person and if you still have feelings for them. Do you love them as much or if not more than the new love interest? Do you see yourself having a future with this person?

If not, then it’s time to end the relationship for the sake of doing what’s right. If you don’t feel the same way about the person anymore, it’s only fair to end it and be kind about it.

There isn’t necessarily a need to tell them that the reason you’re breaking up is because you’ve fallen for someone else. That can be incredibly painful to hear, and it’s best to just tell them you don’t feel the same way anymore, and you’d love it if you could remain friends.

Making sure that you don’t mention someone else being the reason is crucial. There really is nothing worse than being dumped unceremoniously for someone else.

Next, realize what you want to do about the person you’re falling for. Are they single or attainable? Do you think they feel the same way about you? Is there any proof that can corroborate that?

Sometimes falling for someone isn’t the same thing as wanting to be with them, so take some time to find out if this is really the case.

Besides, if you decided to end things with your current relationship, it’s probably best if you take some time off from being in a relationship to be alone for a while.  That way, you can figure out if you really do want to be with this person.

Whatever you decide, it’s going to be a bumpy ride. Either you will follow your heart and hurt your current boyfriend/girlfriend in the process, or you wont, and you’ll hurt yourself.

There are times, however, when caution should be thrown to the wind, and as the saying goes, “the heart wants what it wants.”