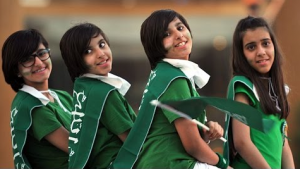 National Day in Saudi Arabia is held on 23 September each year. However, no public events to commemorate the day have been organized for decades until King Abdullah bin Abdul Aziz came into power. A national day for Saudis signifies the unification of Saudi Arabia in 1932 which was brought about under the rule of King Abdul Aziz Al Saud, and this year is the 81st year anniversary of the event.

In previous years, Saudi citizens have not been permitted to have any celebrations on this day, as clerics viewed that the only holidays which were to be publicly observed were those in celebration of their religious festivals and any other holiday observance was considered to be an “affront to Islam.”

Following the terror attacks on Saudi Arabia in 2003 and 2004, the Saudi government recognized the “need to encourage patriotic sentiments.” The government took to introducing subjects into the Saudi schools focusing on ‘watania’ or patriotism, and as soon as King Abdullah bin Abdul Aziz took over in 2005, he made National Day in Saudi Arabia an official public holiday across the nation.

Official celebrations are now well-organized for the public to celebrate and enjoy National Day. In 2015, a new video was released in time for National Day celebrations, which featured a Jeddah-based rapper, Amarap Ammar’s new single, ‘May We Never Be Divided.’ The video was posted on YouTube in celebration of their National Day.

The growing interest in the holiday represents how the Saudi society has changed over the years and more importantly, Saudi nationalism’s support and interest in the youth of the country. Many religious conservatives tend to regard the Saudi National Day as a secular festival, though most of the nation are eager to engage in the festivities. 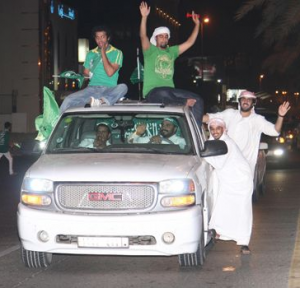 Young Saudi’s celebrating in the streets

Celebrations in 2015, saw crowds waving the green Saudi flags which symbolize their Islamic faith. The streets were jam-packed with young Saudis blaring local music from their car radios and shouting out their windows to hail their nation and its leaders. Once the traffic came to a stop, men danced in the streets.

Families filled the museum and exhibition halls to see the government-organized theatrical productions reflecting on their history, culture, and traditions.

This year larger crowds are to be expected with parades of thousands of cars, buses, and motorcycles, as Saudis wave their national flag.