An exhibit at the Museum of American Poets features women from the Arab world whose love for poetry and writing has captured readers in both Western and Middle Eastern societies. The exhibits reflect the “humanitarian free speech contributions” of these intriguing Middle Eastern-American poets. These women were bold enough to print their work, writing which many living both inside and outside their borders would most likely have censored.

Three women, in particular, played an instrumental role in ethnic American poetry, and their work is featured in the book The Poetry of Arab Women: A Contemporary Anthology. 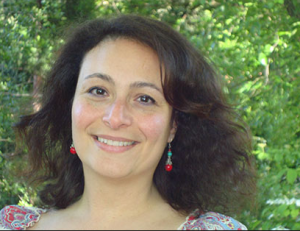 Deema K. Shehabi, a Palestinian poet, wrote beautiful poetic work which was published in anthologies and literary journals including the Atlantic Review. Shehabi was employed as the managing editor for a quarterly magazine distributed across Northern California. She currently resides in the San Francisco Bay district.

Author, poet and performance artist, Elmaz Abinader, is an Arab-American whose writing has been both printed and performed on stage throughout the United States and the Middle East. Her most recent work, In The Country of My Dreams, earned her the Josephine Miles PEN Oakland award for multi-cultural poetry. 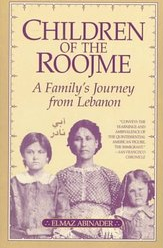 Adinader’s first book – Children of the Roojme: A family’s Journey from Lebanon

Country of Origin was Abinader’s first play which won two ‘Drammies’ from the Oregon Drama Circle, and she toured with her second theatrical production, Ramadan Moon. Her first book, Children of the Roojme: A Family’s Journey from Lebanon, is a widely-acclaimed memoir of the trip taken by a family during their migration from their homeland. She has also served as a senior at Fullbright in Egypt and presently teaches at Mills College.

Nathalie Handal lived in the United States, Europe, the Caribbean, and traveled to the Middle East and Europe as a poet, writer and literary researcher. She currently lives between her New York and London homes where she works as a researcher in the English and Drama Department at the University of London. 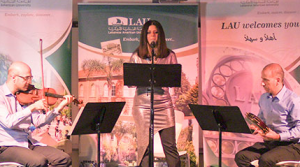 Handal accompanied by musicians at one of her poetry readings

Handal’s work can be seen in several magazine publications, literary journals as well as anthologies in the United States, the Arab world, and Europe. Handal has also read and performed her poetry and given lectures on Ethnic-American literature across a wide range of institutions including Sorbonne, Yarmouk University, University of Jordan, University of London and many other universities and conferences throughout the world.

Her writing is featured in her book entitled, The Never Field, and is also available on CD, which features improvisational music by Russian musicians, Vladimir Miller and Alexander Alexandrov. Handal is also the editor of The Poetry of Arab Women: A Contemporary Anthology, which features the most inspiring female Arab writers.