The ancient quarter of Palma, the capital of the Balearic Islands is filled with charming streets and fascinating stone staircases, galleries, arcades. The old houses have magnificent patios which one can see through heavy wooden doors and wrought-iron gates still present on some of the premises. These are all remnants of the Arab era when Palma was once a great city in the Mediterranean region. 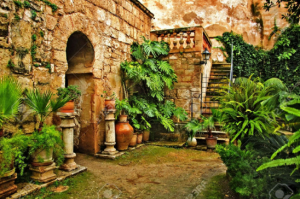 Palma is the largest city on the Spanish island of Mallorca, and along with the islands of Menorca, Ibiza, and Formentera, make up the Balearic Islands.

On the remote parts of the island, the ruins of the Moorish culture have remained. Visitors can still see the dry stone walls which form hillside terraces, as well as the North African water wheels, wells and irrigation channels used in agriculture. Numerous other locations on the island show traces of the Arab culture, such as Alcúdia, Albufera, Deia, and Binissalem.

Along with the Arabs came the introduction of sophisticated irrigation systems, which saw the agriculture flourish as the main source of income on the islands. High yields of wine were produced from the vines on the island, and meat and Minorcan cheese were highly available.

The Arabs’ culinary influence is still evident in the use of fruits and almonds in savory dishes and also in some of the spices and sweet dishes. Some of the architecture, ceramics, embroidery and wrought iron still stand as reminders of the Arab era. 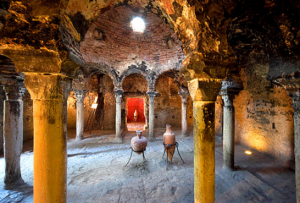 The most significant remains are located in Palma. The Almundaina Palace was initially built by Al Hawlani as the Governor’s Palace, and the Arab baths have a history that dates back to the Arab period in the Islands. They are hidden on a tiny street in the old city, surrounded by beautiful gardens. These baths are the only entire Arab structures to remain and are believed to have been part of the household belonging to a nobleman. They are one of the most popular tourist attractions in Palma de Mallorca. The baths remain as the last testimony to the presence of Arabs on the island more than three hundred years ago.

The Almudaina Palace still draws travelers’ attention and was once the seat of the Moorish rulers. The walls surrounding the palace rise above the quarters which was once the grand home of kings, and still houses a small Arab Bath and offers a panoramic view of Palma’s harbor.

In the middle ages, it was the Royal Palace and is now the official residence of the King of Spain when he is visiting Palma. The palace also houses the Museum of National Heritage and the Harbor Office of the Balearic Islands where visitors can view antiques, suits of armor, and numerous works of art.

These are just some of the remnants left behind by the Arabs whose rich culture has influenced the daily life of the people living on the Balearic Islands today.