Maysoon Zayid is a Palestinian-American comedian and actress. She is best known for her personality and sense of humor but has also unfortunately been labeled for having a disability. Living with cerebral palsy, Zayid has stood through some harsh criticism from the media. 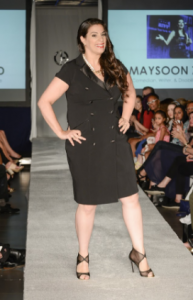 Maysoon Zayid hits the runway in “The Maysoon” dress

There are, however, Americans in our community who recognize and appreciate people suffering from disabilities who try to live regular lives.  One such person is New York fashion designer, Carrie Hammer, who paid tribute to Zayid by naming one of her dresses ‘Maysoon.’

The black tuxedo dress with a gorgeous collar was unveiled at the New York Fashion Week. The event was a touching moment for Zayid, who took to social media to express her excitement and tweeted “OMG I’m a dress!” She was overwhelmed at having one of New York’s top fashion designers name one of her creations after her. 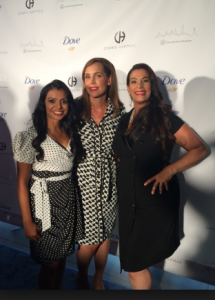 Maysoon Zayid with her other role models from the show

Zayid modeled the slimming dress which bore her name, on the runway along with twenty-six other models. The ladies looked chic and comfortable, and Hammer saw them not as runway models but rather as role models for other women. Hammer intends to cater for the needs of everyday women, and featuring Zayid on the runway was one way in which she was able to achieve this. Hammer was formerly in the advertising industry before starting to design professional clothing for women. She became aware that there was a shortage of comfortable clothing which fitted well and were suitable for the working woman.

Zayid absolutely loved the design which Hammer created especially for her and couldn’t stop raving about it. She was impressed with the great care which was taken in designing a dress which she could use in her everyday life which is both beautiful and sexy. The dress opened and closed in the front which further enhanced its suitability for someone with a disability like Zayid. She was thrilled!