Fashion Utopias is the fifth of the annual International Fashion Showcase (IFS) which is part of London Fashion Week’s “public-facing program,” focusing on the importance of fashion in contemporary culture. 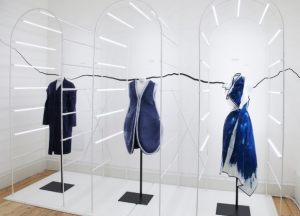 Lebanon participated for the first time this year and presented the ‘Blueprint Beirut’ exhibition. Eight of Lebanon’s emerging designers were featured in the show, all of whom were from the Starch Foundation program. Starch Foundation is a non-profit organization which assists emerging Lebanese designers to launch their careers.

The event was judged by a prestigious panel of individuals representing the fashion industry. The panel was chaired by Sarah Mower MBE, BFC Ambassador for Emerging Talent and Chief Critic at Voguerunway.com, and included Anna Orsini of the British Fashion Council as well as Anders Christian Madsen from ID Magazine to name a few. 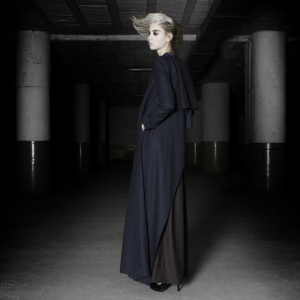 Creations by Timi Hayek were admired by judges

Executive Director of The Arab British Centre, Nadia El-Sebai mentioned that the IFS has always been a prestigious annual occasion with contestants from all over the world participating, and feels that the Middle East hasn’t always been well represented in previous years. She said that they went into partnership with Starch Foundation to introduce audiences in the UK to the strength and diversity of the creative and cultural industries in the Arab World.

Eighty designers from 24 countries showcased their work this year, and out of the three awards, two of them went to the Middle East. We see a promising for the future of our emerging designers and El-Sabai couldn’t be happier.