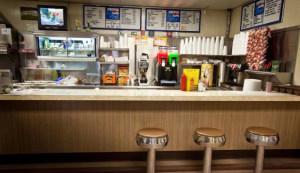 The retro counter at Madison Diner

The Misleh family have been serving customers in the Arab-American community of Cincinnati for over four generations, and the locals know their restaurant only too well. Since as far back as before the first world war, they’ve been running diners in the city. ‘Misleh’ in Arabic is translated to ‘peacemaker’ or ‘social reformer’ which is what they’ve been doing, reforming the taste buds in their society.

They own Madison Bowl, Madison Diner, and Oak Tavern in Oakley, and are still keeping their business going after so many years. Once you’ve entered their Madison Diner, you’ll realize the prominent role which this family plays in keeping their culture’s food and traditions alive.

They have an awesome retro counter, where you can hearing crashing pins behind you, and enjoy a tasty breakfast or lunch with a great atmosphere around you. If you’re coming in for dinner, try one of their delicious recipes – Cincinnati chili, which has a light vinegar tang to it, or his 12 bean soup with its smoked turkey legs served along with a portion of baked cornbread. 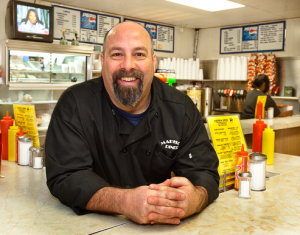 Today, Larry Misleh keeps his family’s business going. He spends a lot of time around his family and is involved in his community and church. His family works together to keep things running smoothly. His son assists him at his Diner every weekend.

Larry’s dad, Jack, as well as his uncle, Adeeb owned franchises on the East side which include Oakley, Walnut Hills, Norwood, and Fairfax. They have since passed, but their legacy continues through Larry and the franchises which his father and uncle owned previously, are now being run by his cousins.

Larry has many fond memories of his father, and recalls how they would deliver pots of chili to the other franchises, and had to keep an eye on their speed to watch that the pots of chili didn’t tip over.

But it’s Larry’s grandfather who began their family business way back in 1913. He was a Palestinian Arab Christian named Kaleel Misleh who started El Arab Restaurant on Fourth Street. The original restaurant was opened on the second floor of an apartment building and was initially a club for Cincinnati Arabs. They eventually moved their premises but stuck to their Middle Eastern dishes which gained more popularity. Kaleel met his wife Alice Hamad, who was a Lebanese immigrant in America, and once they married, they ran the restaurant together for more than 50 years.

Today, Larry still serves amazing meals, and keeps the Misleh legacy alive in Cincinnati, by running restaurants where he and his family can continue to serve their community, in much the same way that his forefathers did many years ago.